Using D-amino acids as the building blocks for bioactive peptides can dramatically increase their potency. In this study, the authors generated a database of ∼2.8 million D-peptides using a mirror image of every structure in the Protein Data Bank (PDB). The critical or hotspot residues were studied. Residues critical to target binding and activity can then be ideally done experimentally such as alanine scanning mutagenesis. It can also be carried out computationally such as thermodynamic integration or free energy perturbation.

Two peptides were tested to prove the concept: GLP-1 and Parathyroid Hormone. Both (L)- and (D)-peptides were synthesized by Lifetein LLC. 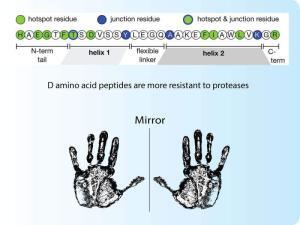 2.  Parathyroid Hormone (PTH) is an FDA-approved treatment for osteoporosis. The (D)-PTH activates PTH1R with a potency and efficacy comparable to (L)-PTH. And more than 85% of the (D)-PTH analog is still detectable at six hours.

Conclusion: The D-Protein Data Bank (PDB) can be used to search and find therapeutically active topologies. The D-PDB could be a key tool for finding stable lead molecules in early-stage drug discovery.

A simple protocol: Maleimide labeling of peptide and other thiolated biomolecules