Proteins and most naturally occurring peptides are composed of amino acids in the L-configuration. However, D-amino acids have been detected in a variety of peptides synthesized in animal cells. Examples include opiate and antimicrobial peptides from frog skin, neuropeptides from snails, hormones from crustaceans, and venom from spiders. These D-amino acids form when L-amino acids undergo posttranslational alterations.

Many proteins are easily degraded or tagged for selective destruction in cells. Peptides that are at least partially made of D-amino acids have shown strong resistance to proteolytic degradation. 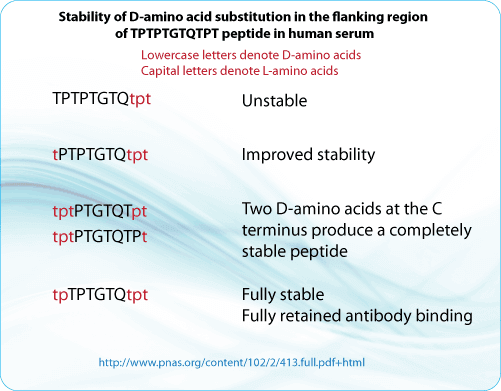 In an additional study performed, the addition of D-amino acids to the N termini of various peptides (t-PTPTGTQTPT and tpt-PTGTQTPT, Lowercase letters are D-amino acids. Captial letters are L amino acids.) increased their stability in both 10% and 50% human serum, but did not offer complete protection from proteolytic degradation. However, adding D-amino acids to both termini yielded peptides that were almost resistant to degradation in serum. Specifically, although t-PTPTGTQ-tpt was more stable than TPTPTGTQ-tpt, the tp-TPTGTQ-tpt peptide was completely stable. Importantly, the stability of the peptides increased according to the number of D-amino acids that were added to the C terminus. The addition of one D-amino acid to the C-terminus (tpt-PTGTQTP-t) improved the stability somewhat, although the peptide could still be degraded. However, adding two D-amino acids to the C terminus (tpt-PTGTQT-pt) yielded a peptide that was completely stable in 50% human serum for the duration of the assay.

These observations suggest that adding combinations of structural modifications, such as substitutions for D-amino acids, to the flanks of antibody epitopes could yield synthetic antigens with the recognition properties of the original antibody, but also strong resistance to proteolytic degradation.

Please click on the following reference for more details of this study: https://www.pnas.org/content/102/2/413.full.pdf+html

In this study, the authors generated a database of ∼2.8 million D-peptides using a mirror image of every structure in the Protein Data Bank (PDB). The critical or hotspot residues were studied. Residues critical to target binding and activity can then be ideally done experimentally such as alanine scanning mutagenesis. It can also be carried out computationally such as thermodynamic integration or free energy perturbation. The hot spot residues and ligand binding hot spots in protein-protein interfaces are important for the biological activity.

Please click on the following reference for more details of this study. All peptides were ordered from LifeTein. Method to generate highly stable D-amino acid analogs of bioactive helical peptides using a mirror image of the entire PDB

Retro-inverso peptides are composed of D-amino acids that are assembled in the reverse order of their parental L-sequences. Retro-inverso peptides are obtained by replacing the normal L-amino acid residues with the corresponding D-amino acids and reversing the direction of the peptide backbone. Therefore, the original spatial orientation and the chirality of the side chains is unchanged. This results in a non-complementary side chain topochemistry between the analog and the parental L-peptide.

The formation of specific folded structures can be facilitated utilizing the conformational preferences of D-amino acids. For example, D-Pro is constrained, and can be used form prime β-turns; the use of several D-Pro-xxx segments can be used to promote multi-stranded beta-sheet formation.

The achiral residue α-Aminoisobutyric acid, Aib contains two methyl groups at its alpha carbon atom. Achiral amino acids can be used as alternatives to D-amino acids during peptide design because they can adopt conformations on either side of the φ-ψ map. A Schellman motif can be used to terminate a helix be placing an achiral or D-amino acid toward the C-terminus of a potentially helical segment that consists of L-amino acids.

Parental peptides made of L-amino acids are far more prone to tryptic digestion than are their D-amino acid or retro-inverso peptides, which mimic the L-peptide and induce a strong antibody response. Therefore, retro-inverso analogs could be useful during the development of synthetic vaccines. Retro-inverso peptides could also be used to assess the interactions between peptides and HLA molecules or T-cell receptors, which could facilitate the development of novel immunointervention strategies.

Except for glycine, all standard α-amino acids can exist in either of two optical isomers, which are mirror image of one other; these are called L- and D-amino acids. 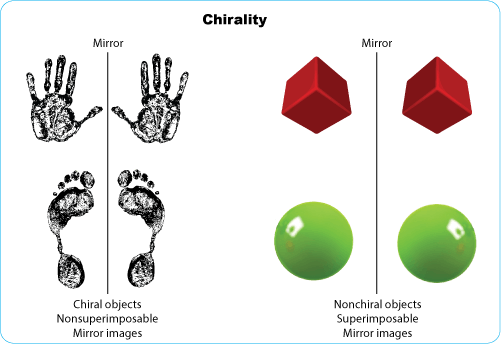 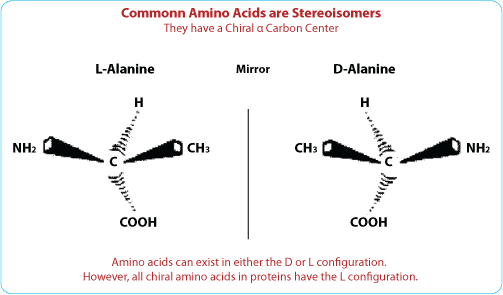 The peptide bonds formed by D-amino acids are more resistant to proteases than those formed by L-amino acids. For example, the amino-terminal Tyr-D-Ala sequence of a peptide drug is not hydrolyzed by aminopeptidases, whereas the corresponding L-peptide is degraded rapidly.

Peptides can be modified using D-amino acids to ensure that they are stable against proteolysis, yet retain the same binding properties as their original all-L counterparts. Studies were performed to assess the antigenic properties and enzymatic stability of several MUC2 peptides whose residues were replaced with D-amino acids in the flanking regions.

Racemase is an enzyme used by cholera bacteria to synthesize large amounts of D-methionine and D-leucine from their L-amino acid counterparts. These D-amino acids instruct cell wall-building proteins to reduce their production of peptidoglycans. The peptide isomerization reaction probably proceeds via deprotonation and reprotonation at the alpha-carbon. This reaction mechanism has been established for the racemases of several amino acids such as those of proline, aspartic acid, and glutamic acid, and two active-site cysteines are involved in this reaction. Racemases are located in the periplasmic space of a bacterium between the inner and outer membranes; it begins synthesizing D-amino acids once the cell stops growing.