Phosphorylation plays an essential role in nearly every aspect of cellular life. Protein kinases regulate the signaling pathways and cellular processes that mediate every aspect of cellular communication and function. However, abnormal phosphorylation is a cause or consequence of many diseases. Mutations in particular protein kinases and phosphatases give rise to many disorders, naturally occurring toxins and pathogens exert their effects by altering the phosphorylation states of intracellular proteins.

We made a biotinylated 34 amino acid peptide with SIX phosphorylation sites. 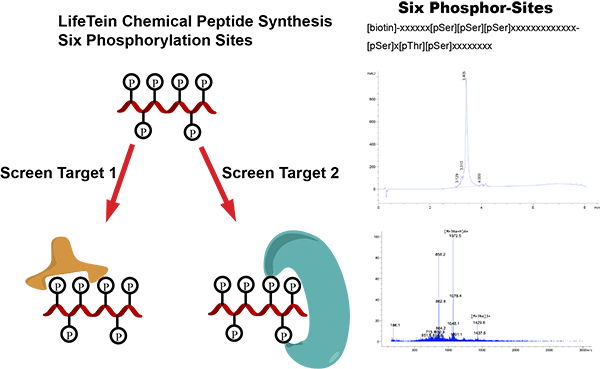 Studies performed using radiolabeling techniques suggested that ~30% of proteins in eukaryotic cells can be phosphorylated. Traditional methods of detecting protein phosphorylation involve 2D gel electrophoresis, or incubating cells with radiolabeled 32P-orthophosphate, generating cell extracts, separating proteins using SDS-PAGE, and finally exposing the resulting gel to film. However, these methods are labor-intensive and require the use of radioisotopes. The following summary provides a brief description of additional more modern techniques that are used currently to measure protein phosphorylation.

Kinase activity can be measured in vitro by incubating an immunoprecipitated kinase with a specific substrate in the presence of ATP. The phosphorylated substrate can then be measured using colorimetric, radioactive, or fluorometric reporter systems.

Many phospho-specific antibodies are highly sensitive, which means that they can easily detect phosphorylated proteins in biological samples. Chemiluminescent and colorimetric detection methods are both conventional, which are generally used in conjunction with molecular weight markers to provide information regarding the molecular mass of the target protein.

ELISAs generally provide indirect measurements kinase activity and are more quantitative than western blotting. The results of phospho-specific ELISAs can by quantified easily using calibrated standards. Two antibodies that are specific for the target protein are commonly used together in a sandwich format to yield high specificity. In addition, the microplate-based format of ELISAs allows high throughput analysis using smaller sample volumes, as well as the detection of low-abundance proteins.

Flow cytometry is an advantageous method for analyzing protein phosphorylation because it allows rapid and quantitative analyses at the single cell level. Cells are usually stimulated, and fixed with formaldehyde or paraformaldehyde to cross-link and stabilize the phospho-proteins before analysis. The fixed cells are then permeabilized to allow the phospho-specific antibodies to enter the cells.

Mass spectrometry (MS) is a useful tool for identifying specific phospho-proteins and phosphopeptides and for sequencing the specific phosphorylated residue. MS affords excellent sensitivity and resolution, which allows users to identify individual proteins or peptides. Although the signals from phosphopeptides are generally weaker than those from non-phosphorylated peptides, novel technologies have been developed that would enable the MS signal to be enriched. Examples of such enrichment strategies include immobilized metal affinity chromatography, phosphospecific antibody enrichment, chemical modification-based methods, and replacing a phosphate group with biotinylated moieties.

Multi-analyte profiling uses phospho-specific antibodies followed by microplate- or membrane-based detection. These assays provide large amounts of data and require a minimal sample volume. However, they are less sensitive than conventional methods because of potential antibody cross-reactivity.

The phosphorylation of Ser, Thr, and Tyr are reversible protein modifications that regulate a myriad of cellular events including receptor signaling, protein association and compartmentalization, the activation and inhibition of protein function, and cell survival. Phosphate groups are negatively charged (with each phosphate group carrying two negative charges); therefore, their addition to a protein changes the characteristics of the protein. This change is often conformational, causing a protein to alter its structure. The protein then reverts to its original conformation when the phosphate group is removed. If the two conformations result in different activities, phosphorylation of the protein will act as a molecular switch, turning the activity on or off.

Many hormones can alter the activity of specific enzymes by increasing the phosphorylation state of their intrinsic Ser or Thr residues. In addition, some growth factors (such as insulin) can trigger the phosphorylation of Tyr residues. The phosphate groups on these amino acids can be removed quickly; therefore, Ser, Thr, and Tyr function as molecular switches during the regulation of cellular processes (e.g. cancer proliferation).

Synthetic peptides play a useful role in studies of protein kinase substrates and interaction domains. Several factors have hindered or limited the applicability of various methods used to synthesize phosphorylated peptides, such as the inability to achieve full automation using solid phases or the lack of convenient interfacing with standard analytical platforms. The process that LifeTein uses to synthesize peptides and phosphopeptides on the PeptideSynTM platform overcomes previous limitations, and exhibits scalability by increasing the efficiency of synthesis. The PeptideSynTM platform is well suited to studies of protein kinase substrates, antigens, binding molecules, and inhibitors.

Case Study: Solid-phase synthesis of a peptide with 5 phosphorylation sites. LifeTein designed and synthesized a series of phosphorylated peptides. ELISA and dot blot analysis were performed for the verification of antibody specificity.

... Antibodies to the Thr345, Ser416, and Ser497 phosphorylation sites of XPO5 were generated in collaboration with Lifetein LLC... Supplementary information

LifeTein helped designed and synthesized a series of phosphorylated peptides. Then the peptides were used for phospho-specific antibody productions. The phospo-specific antibodies by LifeTein were confirmed to react with the epidermal growth factor receptor (EGFR). The Hung's lab showed that AGO2-Y393 phosphorylation mediates EGFR-enhanced cell survival and invasiveness under hypoxia. These findings suggest that modulation of miRNA biogenesis is essential for stress response in tumor cells.