Ask Me About Fluorescent Peptides

Please click here to get a quote for Fluorescent Peptide Services now!

QSY 9 succinimidyl ester has a strong visible absorption (~560 nm) but no fluorescence. It is used as an acceptor in fluorescence resonance energy transfer (FRET).


Fluorescent dyes are the primary means of labeling biomolecules. The most common such dyes are FITC derivatives, which have a wide range of applications in ﬂuorescence microscopy, ﬂow cytometry, and immunoﬂuorescence-based assays.

Reference: FRET as a biomolecular research tool — understanding its potential while avoiding pitfalls

Fluorescence resonance energy transfer (FRET) is a method that allows the distance-dependent interaction between the excited states of two distinct dye-linked molecules to be detected. The excitation is transferred from a donor to an acceptor without emitting a photon. The assay is rapid, highly sensitive, and straightforward to perform. Although it is possible to perform FRET using a single type of dye, the majority of applications require two. A practical measure of FRET efficiency is the distance (Förster-radius) at which the rate of energy transfer equals the rate of donor fluorescence.

FRET is used to measure the transfer of energy from the donor that is excited initially (dye 1) to an acceptor (dye 2). The wavelength at which a donor typically emits light, λd, generally overlaps with the absorption wavelength, λa, of the acceptor. The energy transfer occurs in one of two ways, depending on the chemical structure of the acceptor if the donor and acceptor dyes are in close proximity (10–100Å): 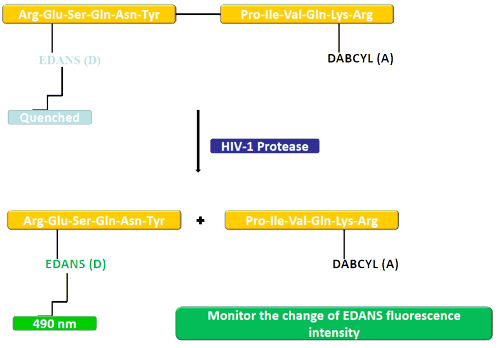 In this example, the donating (EDANS) and accepting groups (DABCYL) are attached to a natural substrate of HIV protease. In an uncleaved substrate, DABCYL quenches EDANS; therefore there is no detectable fluorescence. After the substrate has been cleaved by HIV-1 protease, DABCYL no longer quenches EDANS, allowing the EDANS fluorescence to be detected. Changes in the intensity of EDANS fluorescence can then be monitored to assess the efficiency of protease inhibitors. 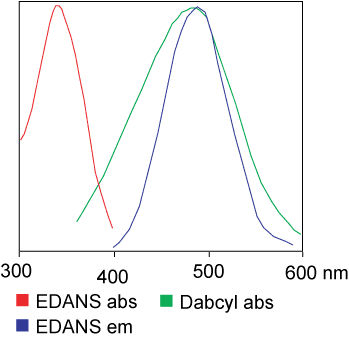 FRET peptides can be used to study peptidase specificity because they allow reactions to be monitored continuously, allowing the enzymatic activity to be determined rapidly. The peptide bonds between the donor/acceptor pair can be cleaved, which generates a fluorescent signal to allow nanomolar concentrations of enzyme activity to be measured. When intact, FRET peptides quench internal fluorescence; however, the cleavage of a peptide bond between the donor/acceptor pair releases a fluorescent signal that can be detected continuously, allowing enzyme activity to be quantified.

FRET peptides are used as suitable substrates in many different enzyme studies: 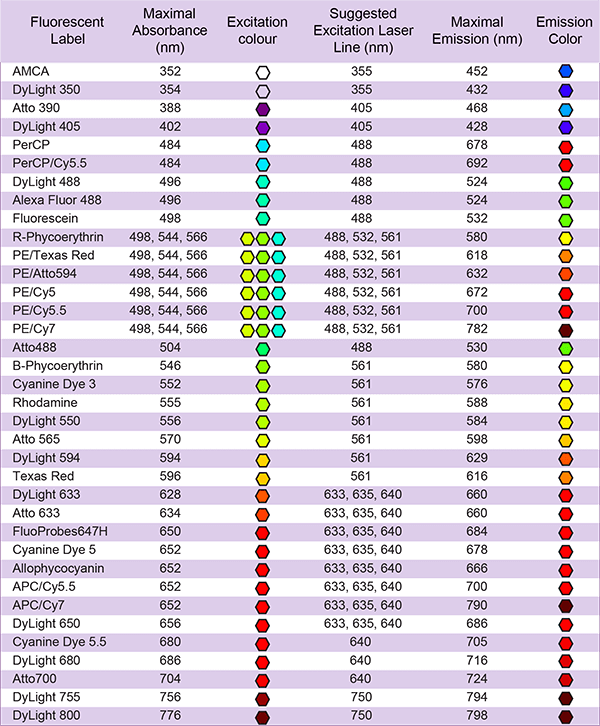 FITC is more reactive than carboxy ﬂuorescein, which must also be activated before use. FITC can react extensively with sulfhydryl groups， such as the side chains of reduced cysteine residues. 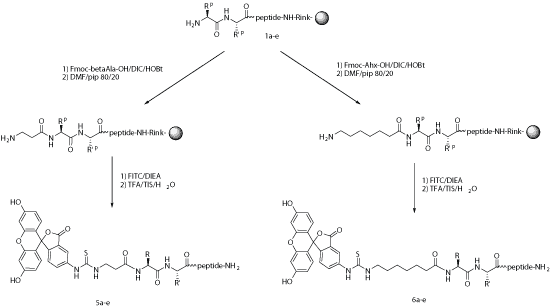 For many applications, ﬂuorescent labels can be introduced during chemical synthesis. After the selective unmasking of a protecting group, FITC might react with either lysine, an ornithine side chain, or with a primary amino group at the N-terminus of the growing peptide. In this latter case, an alkyl spacer such as aminohexanoic acid (Ahx) is introduced between the last amino acid and the thiourea linkage that is generated during the reaction between isothiocyanate and amine.

Under the acidic conditions required for linker cleavage, N-terminal FITC-labeled peptides undergo a cyclization step, which leads to the formation of ﬂuorescein with the subsequent removal of the last amino acid. This can be avoided when a spacer such as aminohexanoic acid is used, or if the targeted peptide is released from the resin via non-acidic cleavage.

Steric hindrance, which sometimes is the main reason for using Ahx, is no barrier to directly coupling FITC and the peptide. Ahx or b-Ala can be used successfully as spacers to generate FITC-labeled peptides. 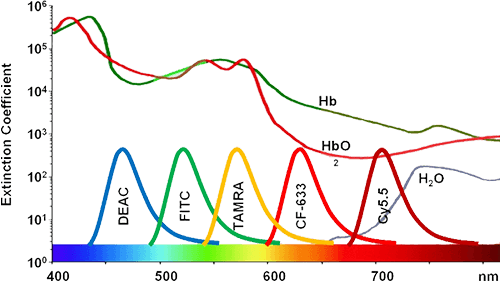 An additional reactive fluorophore, tetramethylrhodamine (TAMRA), also exhibits properties that are not ideal for intracellular reactions. TAMRA-based probes result in the most uniform intracellular distribution of all common FRET probes and have the most efficient diffusion through the cytoplasm. Nevertheless, TAMRA chromophores offer multiple advantages compared with FITC. For example, TAMRA exhibits increased resistance to photobleaching than does FITC. FITC is typically excited at 494 nm and emits fluorescence at 520 nm. In contrast, the maximum absorbance and emission of TAMRA occur at 546 nm and 580 nm, respectively. Importantly, TAMRA contains one extra positive charge compared with, which might increase the interaction between TAMRA and target compounds, and also facilitate binding between the probe and the compound. Similar to Cy3, TAMRA is very stable and bright; therefore, it is an excellent fluorochrome. Importantly, the combination of FITC and TAMRA can be used because of the separation between their respective excitation and emission maxima and because they do not quench each other.

Fluorescent dyes such as biotin and FITC can generally be added to either the N- or C-terminus of a peptide. Nevertheless, we recommend adding such modifications to the N terminus because it results in shorter turnaround time, is more likely to be successful, and does not require additional coupling steps. Because peptides are synthesized from the C- to the N-terminus, the addition of an N-terminal modification is the final step in the SPPS protocol.

The majority of commonly used dyes are large aromatic compounds; therefore, the incorporation of these bulky molecules could prevent interactions between the peptide and the dye. This helps the retention of the appropriate peptide conformation and biological activities. We also recommended that clients include a flexible spacer, such as the six-carbon linker Ahx, in their synthetic peptide projects because it increased the stability of the fluorescent label. FITC can also be linked readily to the thiol of cysteine or an amino group of lysine.

Is a spacer required for fluorescent modification?

How should I dissolve peptides?

How do I choose the best level of peptide purity for my research?

This case study shows the most commonly used approach for FRET assays. The fluorescent dye MCA (methoxycoumarine acetic acid) is incorporated at the N-terminus of a peptide, which was synthesized as a substrate for stromelysin, a matrix metalloprotease. The quencher N-3-(2, 4-dinitrophenyl)-L-2,3-diamino propionyl (DPA) was then incorporated after the enzymatic hydrolysis of the scissile Gly-Leu peptide bond (Knight et al., 1992).

The sequence of the peptide used is as follows:

Enzymatic hydrolysis of this peptide cause separation of the MCA and DPA groups and a significant increase in MCA fluorescence. This increase in fluorescence can serve as an indicator of the speed of the reaction. This has allowed investigators to establish the values of Kcat/Km of this substrate for several members of the matrix metalloprotease family. This assay was recently used to determine the potency of potential inhibitors of stromelysin through measurement of the effects of the inhibitors on the initial velocity of the enzymatic reaction (Copeland et al., 1995)

The client requested a very hydrophobic peptide 68 amino acid in length (85% purity) with FITC modification at the N-terminus. The peptide was successfully synthesized in 4 weeks.