Ask Me About Cyclic Peptides

Please click here to get a quote for Cyclic Peptide Service now!

Disulfide bonds are an integral component of the three-dimensional structure of many proteins. These covalent bonds are found in almost all classes of extracellular peptides and proteins. A disulfide bridge is created when a sulfur atom from one cysteine forms a single covalent bond with another sulfur atom from a second cysteine residue located in a different part of the protein. These bridges help to stabilize proteins, particularly those secreted from cells.

The artificial formation of disulfide bridges requires the proper management of cysteine residues, including first protecting and then later removing side groups and properly pairing the cysteine residues. This is the most frequently used method for peptide cyclization.

Adapted from ChemWiki by Tim Soderberg

Disulfides in proteins play an important role in the maintenance of biological activity and conformational stability. In chemical synthesis, the folding and disulfide formation of the fully unprotected amino acids in an aqueous solution by a mild oxidization to form the target product with the correct disulfide bonds.

An oxidizing agent was used for the disulfide formation. The purified and reduced peptides were dissolved at pH3-8 with the oxidizing agent. The optimal pH range for disulfide formation is between 3 and 8. The protein denaturation may occur if the pH is lower than 3. The disulfide interchange is too fast at pH higher than 8. The oxidation reaction is usually 1-4hours and monitored by analytical HPLC. The human defensin peptide was successfully synthesized. Defensins are cysteinyl rich, cationic and antimicrobial peptides.

Why is Cysteine so Special?

Advantages of a cyclic vs. linear peptide scaffold

Cyclic peptides are more stable against chemical- or enzyme-based degradation. The majority of enzyme-based degradation pathways are initiated via either the N- or C-terminus of peptides. However, cyclic peptides have no termini; therefore, they are degraded by peptidases to a much lesser extent than are linear peptides. Studies revealed that cyclic peptides exhibit enhanced cell permeability, as well as increased bioavailability, activity, and binding specificity. Structures that are restrained conformationally do not possess the flexibility that is observed with linear peptides, which reduces their binding to non-target molecules and increases their activity toward the specific target.

Many cyclic peptides utilize S-S bond formation within their structure to enhance the rigidity of their conformation. This allows both receptor selectivity and increased potency. Cyclc peptides exhibit improved biological activities compared with their open-chain counterparts because their structure is more rigid. We routinely prepare cyclic peptides using head-to-tail ring closure, and commonly achieve directed and complete Cys-Cys disulfide cyclization by monitoring the reaction carefully.

Arg-Gly-Asp (RGD) peptides contain aspartic acid, which is highly susceptible to chemical degradation and the resulting loss of biological activity. Previous studies compared the solution stability of a linear and cyclic RGD peptides (Arg-Gly-Asp-Phe-OH, and cyclo-(1, 6)-Ac-Cys-Arg-Gly-Asp-Phe-Pen-NH2, respectively) in buffers of varying pHs and concentrations. The cyclic peptide was 30-fold more stable compared with the linear peptide at pH 7. The linear and cyclic peptides are both degraded via their aspartic acid residue. The increased stability of the cyclic peptide, particularly at neutral pH, could be explained by the increased rigidity of the ring, which prevents the Asp side chain carboxylic acid from being orientated in a position that allows degradation of hte peptide backbone. 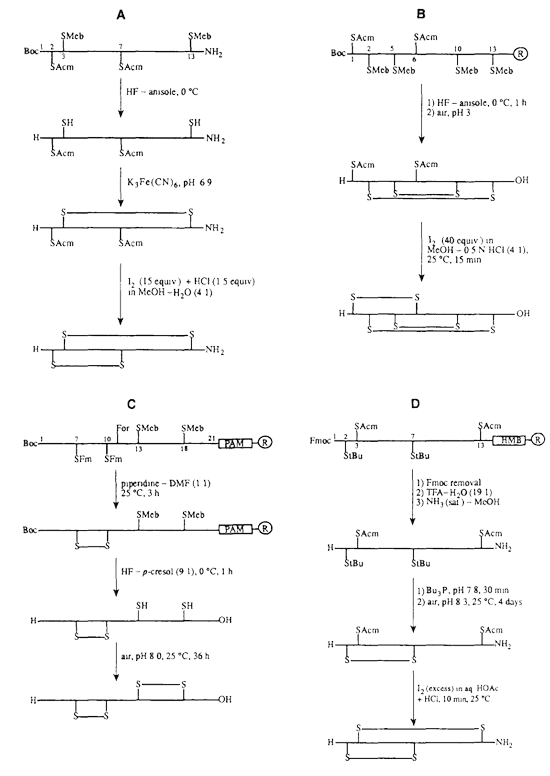