A series of peptides were synthesized by LifeTein and used for the competition binding assay. Both the KL1 and KL2 domains of β-Klotho participates in ligand interaction. The FGF19 peptide was used for alanine scanning mutagenesis. It was found that a single amino acid mutations in either region were sufficient to abolish β-Klotho binding. FGF19 and FGF21 function through β-Klotho to regulate glucose and lipid metabolism.

How to perform the solid-phase binding assay

2. Plates were washed twice with PBST and blocked with 3% (w/v) BSA in PBS for 1.5 hours at room temperature.

3. The conditioned media containing β-Klotho were added to the plates and incubated for 1.5 hours at room temperature.

4. Plates were washed a few times.

5. The peptide mutation FGF21 and an anti-β-Klotho antibody were biotinylated with EZ-Link Sulfo-NHS-LC-Biotin at the indicated concentrations.

6. After wash, streptavidin-HRP was used for detection.

How to do competition binding assay?

1. The WT and mutant peptides were custom synthesized and purified (>95% purity) by LifeTein.

2. Binding of FGF19 and FGF21 peptides to β-Klotho was assessed.

3. The β-Klotho ECD 6 × His, varying amounts of FGF19 and 21 peptides, and biotinylated human FGF19 or FGF21 protein were prepared.

4. The streptavidin donor beads and nickel chelate acceptor beads were added to the plates.

5.Plates were incubated for 3 hours at room temperature protected from light and read on the Plate Reader. 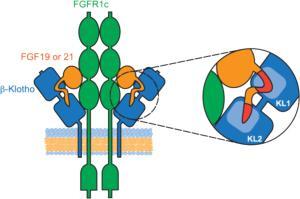