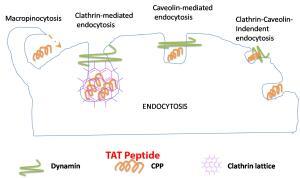 Trans-activator of transcription (Tat) is a cell-penetrating peptide. The peptide can translocate numerous proteins, peptides, DNA, RNA, and small drugs into the cytoplasm with high efficiency. The Tat-NTS (NH2-YGRKKRRQRRR-RSFPHLRRVF-CONH2) peptide was found to specifically block the interaction of ANXA1 with importin β. This blocking would inhibit the nuclear translocation of ANXA1, consequently protecting neurons from ischemic stroke damage. So the Tat-NTS peptide can be used as a novel and potentially promising new therapeutic candidate for the treatment of ischemic stroke.

The Tat sequence is originally from a crucial non-structural protein of human immunodeficiency virus (HIV). The function of Tat is to bind to the viral long terminal repeat (LTR) and activate cellular transcription machinery to initiate transcription of the viral proteins. Later, it was found that this 11-amino acid positively charged peptide can pull diverse molecules across cell membranes in vitro and in vivo. Fusion proteins constructed with TAT rapidly enter and exit cells and cross intracellular membranes. Electrostatic interactions between TAT and the cell membrane have been implicated as a part of the mechanism of transduction. Neither apoptosis nor necrosis is induced in cells after exposure to TAT.