Bioactive peptides have potential as drug leads. However, one of the peptides’ limitations is their poor stability.

One solution is to graft peptides onto suitable molecular scaffolds. When the peptide scaffolds are rich in disulfide bonds and have no free ends for proteases to attack, the peptide drug would be a stable candidate.

Cyclic disulfide-rich peptides: Stability Matters
Many natural peptides have stable and conserved cyclization. The cyclic chlorotoxin can preferentially bind to tumor cells. The defensin, an antimicrobial peptide, is an 18 amino acid peptide with three disulfide bonds in a laddered arrangement. The cyclotide has about 30 amino acids with three disulfide bonds in a knotted configuration. The cyclic conotoxin cVc1.1 has potent analgesic activity.

Molecular grafting
The purpose of molecular grafting is to make a linear peptide sequence into a disulfide-rich peptide with desired stability or oral bioavailability. It was found that the stability of linear peptide epitopes in human serum can be enhanced by grafting them onto a stable scaffold. For example, a crafted peptide comprising an epitope from myelin oligodendrocyte glycoprotein (MOG) is resistant to degradation in human serum (>24 h) and remained intact in strong acid after 24 hours. In the MOG study, the epitope was grafted into the β-turn of Kalata B1 to mimic its native conformation and it turned out to have the increased bioactivity and improved affinity and receptor selectivity. A grafted peptide based on the cell-penetrating peptide cyclotide MCoTI-I demonstrated the delivery of the bioactive peptide across the cell membrane and into the intracellular space. 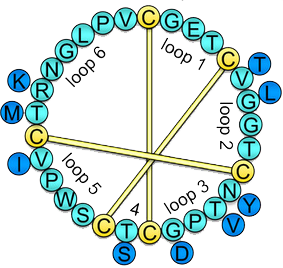 2.Structural and functional characterization.
The peptide epitope should be from the fragments of an interacting protein or functional and bioactive known domains from the screening assays such as a phage display library.

Then where should the epitope be grafted onto the scaffold？There are a few possible suggestions: insertion between two existing residues; substitution of one or more residues in a single loop; replacement of residues that span across connected loops; or replacement of most of the native residues of the scaffold.

3. How to make the grafted peptides?
The grafted peptides have been made using solid-phase chemical peptide synthesis. First, the reduced linear precursors are assembled. They are the sequences from the scaffold and epitope. Then oxidization and cyclization are performed to form the final product. However, synthesis of more complex peptides with multiple disulfide bonds can be challenging. A peptide comprising just three disulfide bonds would have 15 different connectivities. In addition, grafting of an epitope onto a scaffold may not be folded correctly, or it does not have the desired activity.