CPPs have been used as a carrier to deliver proteins or genes into cells and tissues. In this study, a CPP library composed of 55 CPPs were used to deliver genes into plant cells. Many CPPs showed efficient penetration into plant cells. The Lys-containing CPPs have higher penetration efficiency in the plant than in animal cells. This could be due to differences in lipid composition and surface charge of the cell membranes. No correlations were detected between the penetration efficiency and the cationic, amphipathic, or hydrophobic properties of peptides.

D-R9 is composed of D-form amino acids. D-R9 bound preferentially to the membrane and did not penetrate the cytosol or vacuole. In mammalian cells, poly-Lysine-based CPPs are efficient and interact with membrane lipid head groups to induce wrapping of the membrane monolayers. Arg-rich peptides, such as the Tat peptide, are among the most efficient CPPs. Arg-rich CPPs may generate negative Gaussian membrane curvature to form pores or protrusions from endocytosis. The cell penetration efficiency of CPPs containing poly-Arg is higher than those containing poly-Lys. However, in a plant, Arg-rich CPPs are not the most efficient at penetrating plant cell. 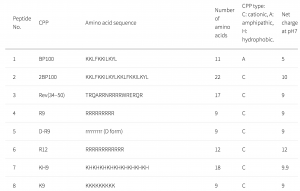